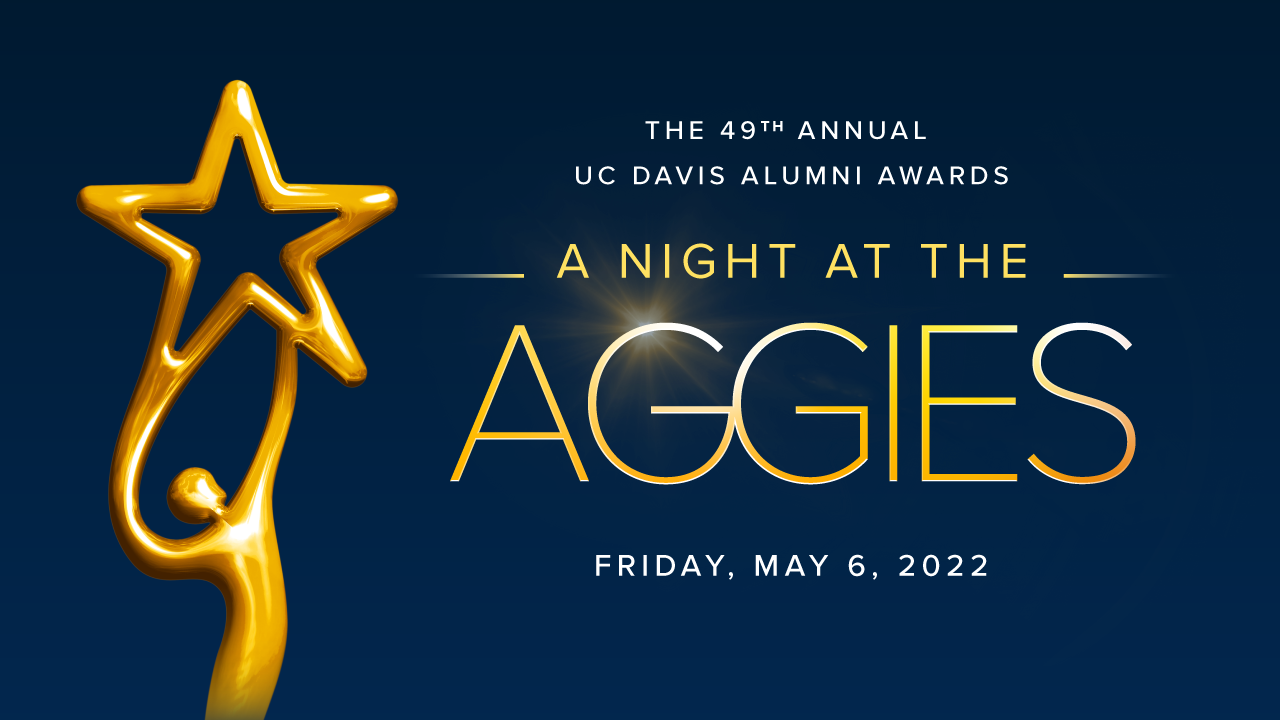 And the Alumni Award goes to...

The Cal Aggie Alumni Association of the University of California, Davis, today (March 8) announced the recipients of its 2022 Alumni Awards.

The awards honor the accomplishments of six dedicated alumni and friends, including a doctor dedicated to improving diversity in health care, a former CEO who has devoted his life’s work to sustainability in the tech industry and a legendary winemaker of the Napa Valley.

The Cal Aggie Alumni Association (CAAA) — which serves more than 290,000 UC Davis alumni — selected these exceptional individuals to recognize the amazing impact they have on UC Davis and the world:

Though from many different professions and backgrounds, these stars all personify Aggie Pride: They are committed to making UC Davis, and the world, a better place for everyone.

The 49th annual Alumni Awards gala, “A Night at the Aggies,” will take place at UC Davis on Friday, May 6.

Register online with a credit card 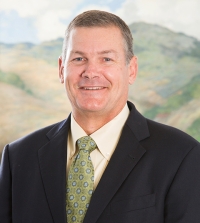 Charles “Chuck” Nichols, of Visalia — Chuck Nichols is a longtime leader of California agriculture and the president of Nichols Farms, one of the largest family-owned pistachio growing, processing and marketing companies in the state.

Nichols comes from a multigenerational farming and Aggie family — his father, wife and eldest son also graduated from UC Davis — and is dedicated to the people and agriculture of the Central Valley.

To provide hands-on experience to students and bring skilled workers to the region, he founded the Central Valley Scholars Program at UC Davis, which provides financial support and internships for students from the valley, helping them start careers and return to the area employed after graduation.

Throughout his career he has regularly partnered with UC Davis, sharing his expertise as an industry leader and his forward-thinking approaches to sustainable agriculture. Nichols served as president of CAAA for two years and as trustee of the UC Davis Foundation. 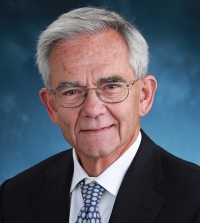 William “Bill” Sullivan, of San Jose — As CEO of Agilent Technologies from 2005 to 2015, he led breakthrough innovations in high-tech electronics and facilitated partnerships between Agilent and UC Davis in electronics, food safety and life sciences.

These partnerships led to a wide variety of projects, including a publicly available genetic database of common foodborne diseases and the development of new techniques for analyzing breast milk.

Throughout his 40-year career in research and management with Hewlett-Packard Co. and its spinoff Agilent, Sullivan was a staunch advocate for sustainability in the tech industry — and he would steer Agilent to becoming one of the most sustainable companies in the world.

Sullivan has served on several UC Davis boards, including the Chancellor’s Board of Advisors and the inaugural Campaign Cabinet, a group of volunteers who provided guidance during the university’s first comprehensive fundraising campaign in 2010. 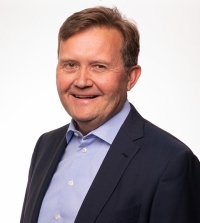 John M. Wasson, of Oakton, Virginia — He is the chief executive officer of ICF International Inc., a $1.5-billion publicly-traded, consulting and digital services company that partners with organizations to tackle some of the most complex economic and social issues of our time.

A homegrown leader, Wasson joined ICF as an associate in 1987 and has been a senior leader for more than 20 years, helping to guide the company’s incredible growth story: ICF has doubled in size every five years on average over the past two decades by providing innovative services and digital solutions to clients in core markets such as energy, environment, climate, public health, education, disaster recovery and much more.

He is one of the most active alumni of the College of Engineering, where he serves on the Dean’s Executive Committee and was an early supporter of the Diane Bryant Engineering Student Design Center. In the Department of Chemical Engineering — where he earned his undergraduate degree — he serves on the department’s advisory board, contributes regularly to scholarships and lab improvements, and was an early supporter of Professor Bill Ristenpart’s Coffee Center.

Wasson also serves on the Jan Shrem and Maria Manetti Shrem Museum Advisory Board and has supported its exhibits and art acquisitions. He is a former member of the UC Davis Foundation Board of Trustees. 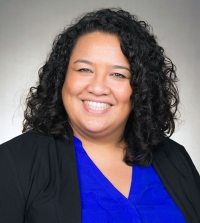 Olivia Campa, of Sacramento—In the four years since she joined UC Davis Health as a physician and faculty member, she has held several leadership roles and created lasting impact in the community.

After receiving her medical degree and completing her residency training at UC Davis, Campa was recruited to join the medical staff due to her exceptional talent, volunteerism and community service.

A primary care physician and assistant clinical professor in the Department of Internal Medicine, she is also the director of the School of Medicine’s Postbaccalaureate Program, designed to help educationally and socioeconomically disadvantaged students apply to medical school.

Campa stands out for her commitment to advancing diversity, equity and inclusion at UC Davis Health and in the health care community at large. She is a member of the Office of Student and Resident Diversity and represents UC Davis in the Association of American Medical Colleges Group on Diversity.

Some of her accomplishments are working to set up a medication assistance treatment program in a local Federally Qualified Health Center, helping her division transition to telehealth during the COVID-19 pandemic, serving as an advisor for the new Gender Affirming Care Program at UC Davis Health, and mentoring/coaching 43 diverse undergraduate students to matriculate into medical school.

She is devoted to delivering compassionate care to people in the Sacramento community, advocating for the success of medical students and mentoring the next generation of health care providers. 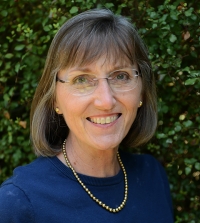 Debby Stegura, of Rolling Hills Estates — She is a longtime community leader and UC and Aggie advocate, whose leadership roles have included serving as the alumni regent, and president of the Cal Aggie Alumni Association and Alumni Associations of the University of California.

A former business litigator, Stegura is passionate about engaging alumni of all ages and backgrounds. Stegura advocates for helping students in need, supporting the Student Emergency Relief Aid Fund, ASUCD Pantry, DREAM Scholarship and other causes. She and her family have created two endowments for student support — one for scholarships and one to help student retention, with preference to first-generation and AB540 students.

Stegura is an executive trustee of the UC Davis Foundation and served for several years on the CAAA board of directors. She is a charter member of UC Davis’ Women & Philanthropy and the UC Davis Library Leadership Board.

In her home community of Rolling Hills Estates, Stegura has twice been elected to public office, first as a Board Trustee on her local library district, and now as a member of the City Council. 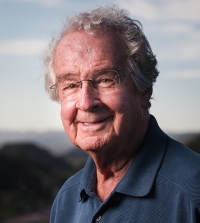 Dedicated to making the UC Davis Library home to the greatest wine- writing collection in the world, in 2018 Winiarski gave $3.3 million to establish the Warren Winiarski Wine Writer Collection to build the library’s collection of works from the world’s most prominent wine writers.

Winiarski mentored several UC Davis alumni, now prominent winemakers, at his former winery, Stag’s Leap Wine Cellars, and he has been a longtime supporter of the university’s viticulture and enology program.

To assist winegrowers amid climate change, he is underwriting the modernization of the Amerine-Winkler Heat Summation Index. The original 1940s UC Davis research was instrumental in reviving the California wine industry following Prohibition.

In 2017, Winiarski was inducted to the California Hall of Fame for his global efforts to showcase and preserve the quality and history of California wine.

Register online with a credit card

Thank you to our Gold Sponsor

Thank you to our Blue Sponsors