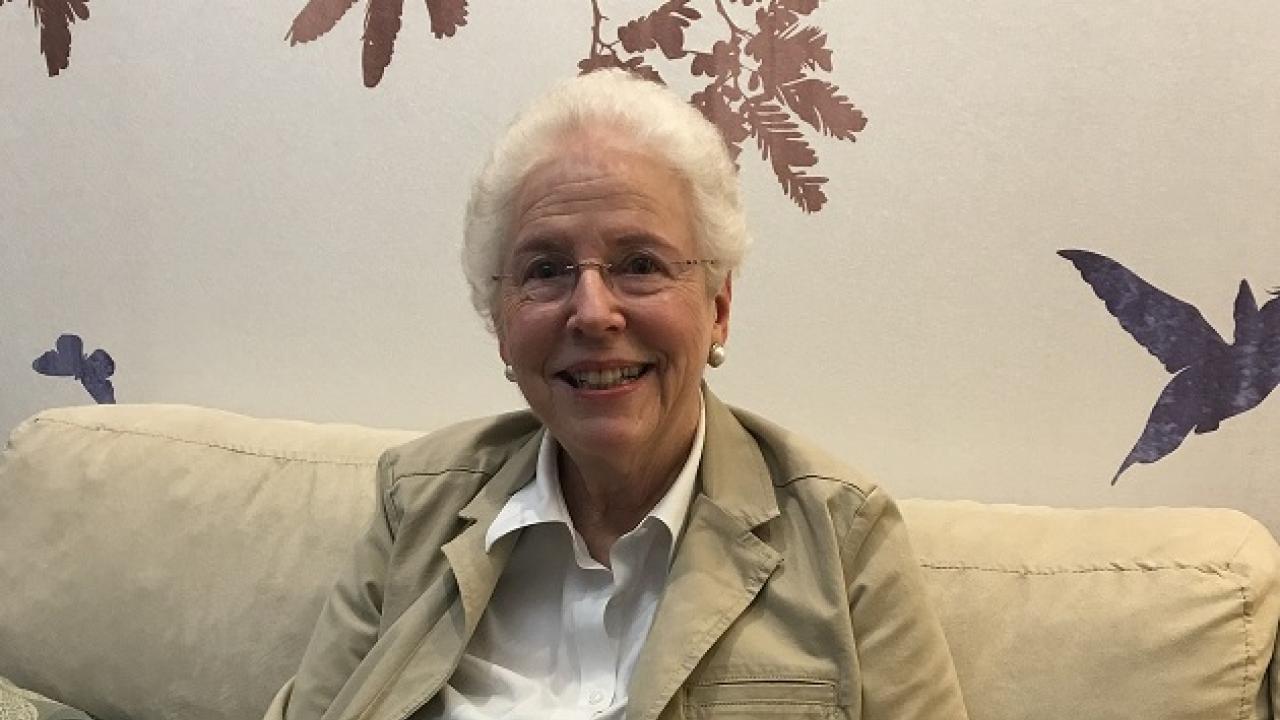 Judy Wydick grew up in Missouri, but for all intents and purposes, she considers herself a Davis native.

Judy and her late husband Richard moved to Davis in 1971 when Richard began teaching law at UC Davis. At the time, King Hall was very young; the Wydicks arrived shortly after the law school graduated its third class. Davis was a much smaller community then, with a population of approximately 22,000 residents (compared to 66,000 residents today). Wydick feels that the quality and quantity of opportunities have grown alongside the overall size of the town and university.

“I still get excited about things happening at UC Davis,” she said. “There are always new things going on, like the Bohart Museum and performances at the Mondavi Center, or the new Manetti Shrem Museum of Art. People here think outwardly; they seek to help other people. UC Davis and many other organizations in the area are working towards projects bigger than themselves.”

For many years, Wydick volunteered in Davis while her husband taught. She was deeply involved in University Farm Circle and International House Davis and worked intensively for Chancellor Meyer on an historical display that was Farm Circle’s contribution for UC Davis’ 75th Anniversary. And while some people choose to move to a new place after they retire, the Wydicks could not imagine living anywhere besides Davis.

Now a resident of the University Retirement Community (URC), Wydick remains involved with the university. Her favorite activities are the events at the Mondavi Center for the Performing Arts and Manetti Shrem Museum of Art. She strongly believes that URC’s connection with the university is its largest attraction for residents, bringing people from all over the country who want to enjoy their golden years next to one of the leading public research universities in the world.

“People here go very quickly from being old to being interesting,” she jokes. “Every night, I have dinner with people whose stories fascinate me, e.g., the woman instrumental in helping spread Hospice nationally; the rocket scientist who worked for NASA; and the woman who was mentored by psychoanalyst Bruno Bettelheim.”

The Wydicks’ fondness for UC Davis students led them to establish the Wydick Family Scholarship that helps mitigate tuition costs for law students who are in need and show great promise.  She has also established one for the Guardian Professions Program to support former foster youth and emancipated minors who lack the funds to continue in a professional field after graduating—and who also may not have the mentoring and guidance that Wydick and her husband were able to provide for their own children.

“I feel that people like us who have been fortunate to do well should help bring opportunities to those who haven’t been so fortunate,” she said. “I was thrilled to see UCD focus on these students who are in such need of attention and assistance.”

Wydick’s home at URC has opened more opportunities for ways she can support and connect with students. Each year, she participates in URC’s “Bizarre Bazaar” (where residents donate or sell bargain furniture, cookware and other home supplies to students) as well as URC’s periodic stocking of the UCD Student Pantry.

“We’ve been very lucky, and that’s why I feel so strongly about giving back,” she said.